As of the time I post this, if you search Google for “Boasian Anthropology,” at the top of the page you get this: 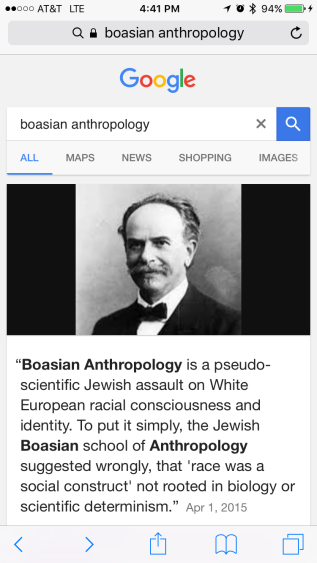 For those who know about the history of Boasian anthropology, the irony – and the insult – that is contained in both the website, and in Google’s decision to feature that as their “snippet,” is almost beyond bearing. While the utility of Boasian thought today might be questioned by a few, Boas had a historic role in combatting “respectable” racism in the United States that is undeniable.

Now, I don’t think that Google is a hub of white supremacy. But I’m sure that the people at the corporation that had “don’t be evil” as a motto will try to hide behind an algorithm, hoping that this launders their moral responsibility. It doesn’t. An algorithm is just another agent or factor (in the old sense of the term), and what this algorithm does they have to own. And best way to take ownership is to remove this as a snippet view, and sit down and discover what went wrong.

I’m hoping that by the time you see this, the snippet offered by the search term will have been corrected. But then, I remember that Google long ago left their motto by the wayside…

UPDATE: The search now yields something quite different – a wikipedia page for Franz Boas. The Verge put out a piece on this, which included the following statement from Google:

Google does not endorse or select responses manually. This content comes from the third-party sites that we do not control. The feature is an automatic and algorithmic match to the search query. We welcome feedback, as we’re always working to improve our algorithms. Users and content owners can give feedback on incorrect information through the “Feedback” button at the bottom right of the WebAnswer.

I’ll leave it to you to decide if this is a case of Google taking moral responsibility, or sloughing it off. I’ve certainly made my mind up on the issue. All I have to say on the topic right now is, to quote a friend of mine, algorithms are social, too.

French Anthropology and Ethnography under threat?

While a great deal of this situation that seems unclear to me,  Dejan Dimitrijevic from the University of Nice has been circulating a petition (the English version of which is below) which suggests that ‘ethnology-anthropology’ is in danger of being stricken from this list of possible diplomas in France. For those interested in find out more, there are other resources available on this issue.

A ministerial proposal for a nomenclature of headings of license diplomas removes the mention “ethnology-anthropology”. The aim of this page of exchange and discussion is not only to defend this field of production of ideas and knowledge, but also to take advantage of this harmful project to promote public awareness of the program of this discipline to a much wider audience than the usual academic teaching space’s one. In the first place, the scheduled
elimination of ethnology-anthropology would be an intellectual and scientific impoverishment: one only has to look through the great debates of the 20th century to measure the importance of our discipline in the construction of the modern values. The greatest ethnological and anthropological works were all linked to the great societal debates of their time, and they are still relevant.

In the first half of the 20th century, the issues of exchange and gift as questioned by Marcel Mauss (The Gift: forms and functions of exchange in archaic societies) did not only intend to produce academic knowledge but also stimulate the social reforms of modernity for a more fair and equitable redistribution of the produced wealth. After the tragedy of the Second World War, the work of Claude Lévi-Strauss was the driving force for the foundation of a new humanism, after the disaster of the exclusively biological design of the Man who legitimated the racialist attempts for hierarchization of human
groups, leading to the extermination of some of them. The cultural conception of the Man allowed a new momentum, universalist and egalitarian, from which comes the formulation which remains the identity and politics of our discipline “unity of man, diversity of cultures,” that Claude Lévi-Strauss developed in a text entitled “Race and history” to the broad public of the UNESCO.

The period of the decolonisation saw the emergence of the figure and the work of Georges Balandier, many still view as one of the founders of modern anthropology, so strong was his call against any anachronistic or exotic drift for the comprehension of non Western societies, African in the first place. Whether in an era marked by the decolonization, or today, while new antagonisms of domination and resistances grow, the need for thinking all the existing human societies as contemporary from/to each other is an unsurpassable anthropological truth.

In a period of reorganization of the world and redefinition of a thought on human potential, in new modernity, characterized by unprecedented globalization (in the sense it is coextensive to all the territories of the planet), ethnology-anthropology remains an essential resource to produce knowledge on the Man, we absolutely need . The desire to eliminate this jewel of modern knowledge can be explained only by the political distrust towards any
space where can be developed a free thought and a universal conception of equality of individuals and human groups.

Ethnology-Anthropology offers students a wide range of formations and specialties, but it also promotes the development of adult and informed citizens. Moreover, maintaining the words “ethnology-anthropology” in the nomenclature of the headings of license diplomas is not enough. An awareness of ethnological and anthropological knowledge should begin in primary school and its teaching should gradually grow in college and high school. It is urgent to engage via this page a constructive action against the scheduled elimination of our discipline:

1°) By demonstrating by a massive petition our firm refusal of the suppression of the mention Ethnology-Anthropology from the nomenclature of license diplomas;

2°) By informing the Ministry about the reality in Ethnology-Anthropology teaching and
the diversity of local situations.